Marc has been dreaming of a red, white and blue snowman for quite some time.  Since it's been over 100 degrees for 28 days in a row, and no end in sight (forecast is for 105-110 all week next week) so it only seems fitting to have a snowman cake in July.
Happy Birthday Marc! 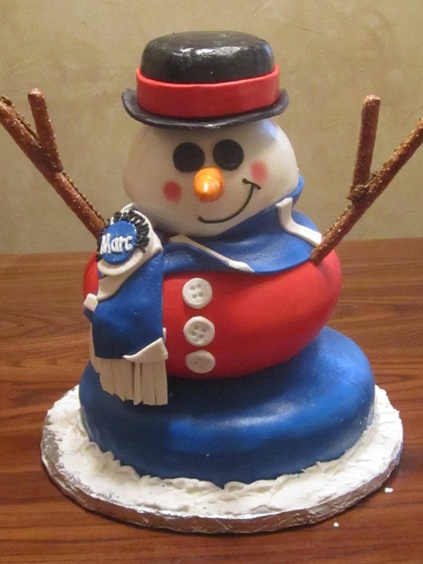 Each layer is made from vanilla cake with vanilla buttercream frosting- I was VERY nervous about stacking the rounds as I didn't know how they'd hold up.  But with a lot of dowels and rods, it held up ok.
The hat is made of rice crispie treats.  I actually made it a couple of weeks ago when I had some left-over black fondant from another project -- so it was solid (and with the fondant, heavy).  It is not actually sitting on the head because I knew it would be the end of snowman's happy smile (the head was the weakest of the 3 rounds -- I probably should have done it in crispie treats as well).
I had never put fondant on a sphere (actually I have, but it wasn't pretty!  So I did some searching online, and the key seems to be rolling the fondant fairly thick and then stretching it down over the cake to keep it from wrinkling.  It took a little finessing, and it wasn't perfect - but, it was ok.
All the decorations (except the arms) are fondant.  the arms are pretzel rods held onto a skewer with royal frosting.  (I wanted to do chocolate, but was afraid his arms would melt off in the heat).

Posted by marilee woodfield at 3:04 PM