I have a couple of wedding cakes scheduled for later this spring and I wanted to try out some different decorating techniques before I try them on the real thing.  So this "dummy" cake has been about 2 months in progress, as I'd work on it when I had a free afternoon, and then set it aside for awhile.

Layer #2 is covered in grey fondant with white royal frosting filigree piping.  No surprises there.

Layer #3 is quilted.  I tried to cheat by using a diamond shaped cookie cutter.  I also tried to eye-ball it, and that was a HUGE mistake as well.  I guess there are no shortcuts when it comes to quilting.  fortunately that's all on the backside.

Layer #4 is covered in grey fondant, and the design was cut out of sugar sheets on my Cricut cake cutter.  That was an ordeal.  I have to say that I'm not in love with the Cricut yet.  Still seems way more labor intensive than just cutting it myself and cutting fondant has been next to impossible so far.  I attached the frosting sheet to the cutting mat with shortening.  Then I had to adjust the speed to low, or it just shredded what it had already cut.  The frosting sheets are fragile -- and must be handled delicately. 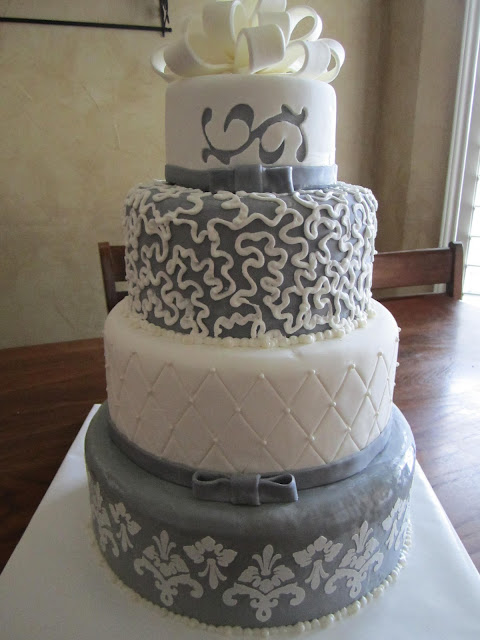 Posted by marilee woodfield at 7:40 PM